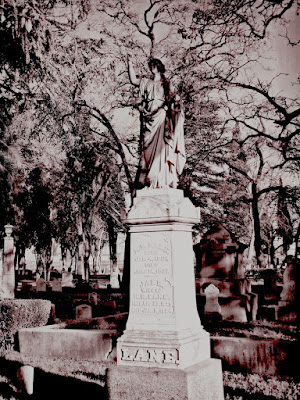 Another resident of Stockton Rural Cemetery is Mr. R.B. Lane. The beginning of his successes started with building a flour mill in Stockton. By 1870, after already becoming established with his mill, he had thought of a way to get into the paper making industry using the same steam power his flour mill ran on. Eventually by 1874, the mill closed.  Although the dream didn't become a reality at first, R.B. Lane didn't give up on the dream completely.

By 1877, he had brought in investors to help with appropriating funds, and a new mill was planned. R.B. Lane's dream, The California Paper Company (California Paper Mill),  had finally came to fruition by March of 1878.

“No enterprise in the State has so revolutionized the manufacturing industries as the starting of the above named mill in 1878, and the entire credit of the establishment is due to the energy and perseverance of Mr. R.B. Lane. He has succeeded in building up an industry that is at present making much of the newspaper used in the State, and will in time supersede all of Eastern importation.

Mr. Lane in 1870 sent East and purchased machinery for making paper, the mill to be run by power from his steam flour mill. The mill was run for a number of years, and it was found that paper could easily be made in Stockton, but to make it a success larger capital and more room were necessary. The mill was closed in 1874, and nothing more was accomplished until 1877. Mr. Lane, however, did not allow his thoughts to sleep, and he interested Messrs. Michael Reese, Nicholas Luning, H. and W. Pierce, E. Judson, A. Dibblee and several other San Francisco capitalists in the enterprise, and in April , 1877 a company was incorporated under the name of the California Paper Company, with a capital stock of $300,000”………

“A block of land was purchased on Mormon Slough, and the contract for erecting the building and starting the mill let to R.B. Lane, and a ground was broken in August, 1877.”….This enterprise is one of the grandest in the State. The Chronicle, Call, Post and Bulletin are partly supplied with paper, the two former alone using over four tons daily.”----

Along with R.B. Lane, his brothers Frank, Harry and Mark were all successful businessman as well in the grain and rubber mill industry.