The mystery behind what exactly happened to Mr. Brooks in 1853, continues to elude us to this day. Another part of the mystery is that the cemetery in which he is buried states that there are no records of Mr. Brooks' burial or grave at all. 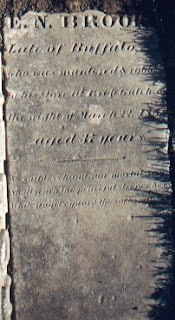 Stockton Rural Cemetery wasn't officially opened and taking in "residents" until 1861-1862, and we know Mr. Brooks died in 1853. So, whether Mr. Brooks was buried first in one cemetery and then reintered there, or if he had always been buried on the property even before it became officially a cemetery has been up for debate.

I started searching, and in 2012 I had discovered an archived newspaper clipping from the Buffalo NY Daily Courier that answers the mystery surrounding Mr. Brooks' death finally.

According to the Buffalo NY Daily Courier 1853, it reads:

“Murder of a Buffalonian”

The Stockton Republican says that a “horrible murder was committed,” on the night of Thursday, the 22nd ultimo, at Rich Gulch, on the Calaveras River, about 30 miles from Stockton. The victim was E.N. Brooks, who has kept a store at that place for nearly five years. He was found on Friday morning, lying dead in his house, near the door, with a gash across the side and back of his neck apparently made with a bowie- knife or sabre. The object of the murderer or murderers was robbery. As Mr. Brooks was known to have a large amount of gold dust by him. The murder must have been committed just as he was going to bed. Mr. Brooks was about 35 years old, very industrious, worthy man and very attentive to his business. He was from Buffalo, N.Y., and of a very respectable and influential family in that place. Mr. Brooks was the brother of our esteemed townsman W. Brooks Esq, and had many friends and acquaintances in our midst."

For now, this story is still a mystery....