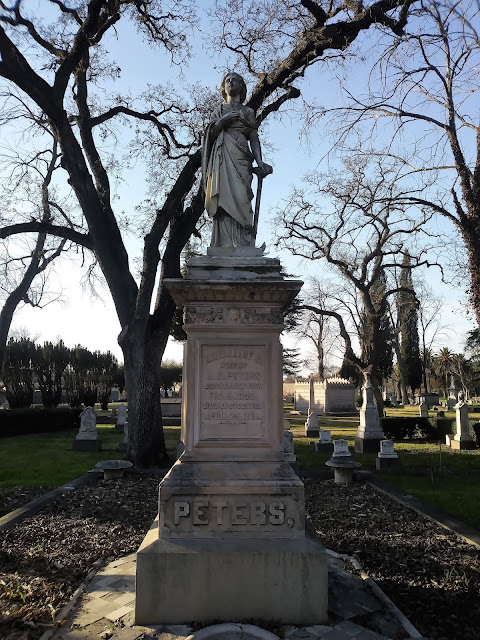 Then came the curiosity. How did she die? Where did she die? And then even more so, how sad for the husband. The broken heart, the pain, the sorrow...and then, where was the husband buried? Since he wasn't buried within Emmaline's plot. So many questions and so very little answers.

Well, as most of us are, we get busy with life and even when we plan to look into something that interests us, sometimes we get caught up in the day to day stuff and forget. Well, it took revisiting one of my favorite cemeteries recently to resurrect that eagerness to tell Emmaline's story.

Emmaline Taylor was born on February 9, 1839, in New York. By the time the Gold Rush had began, her family had traveled up to California and started a hotel in Columbia, California.  It appears that her father may have passed away by the time we get to this particular part of the story, as by this time her mother, only referred to as Mrs. Taylor, was running the hotel with her two daughters, Emmaline and Zuba Taylor.

According to the History of San Joaquin County, authored by George Henry Tinkham, he allows Ernest J. Hopkins to tell his recollection of how J.D. Peters found his bride.  Enjoy!

“First of the teamsters’ tales is the story of how J.D. Peters won his bride. Be it remembered that the problem of getting a wife in those days was a costly one. It costs $2,000 for a man to leave his business, go east and return with the lady of his heart. One of the hotels in Columbia, a favorite hotel of the teamsters was kept by a Mrs. Taylor, a refined and charming woman, who had two pretty daughters, Emmaline and Zuba Taylor.

One day in the ‘50s a new team drew up at the watering trough, and the young man who swung the blacksnake was merry and likeable. He had left his native Genoa and landed in America under a vow that he would never work for any man. He had struck a little gold and this team was his first step towards fortune. This young man, J.D. Peters, tied up and went inside for his meal. He was served by the charming Emmaline herself. Peters’ fate was sealed. But soon his eyes took on a weary look. He was a poor man, and this young lady had said, “I’ll never be a poor man’s bride.”

“Now the teamsters were a jolly lot, with more than usual brotherhood. They sized up the situation and laid their plans to help. Two fancy teams with bright steel trappings and gaudily painted wagons met one noon at the eating house, the drivers entered together to be greeted by Miss Emmaline. And one driver said to the other, ‘Who are you driving for now, Bill?’    ‘Oh, I’m driving for Peters.’    ‘Why, I’m driving for Peters, too,’ replied the other. ‘He’s a fine fellow to work for.’

Emmaline listened with interest. Every day after that new names were added to the army of men who were working for Peters. Then signs began to appear hung on the sides of wagons where all might read.  J.D.P., J.D. Peters,  J.D. Peters & Co. The legend grew and grew – a colossal joke spreading over the whole Stockton-Sonora district.

Wherever the young lady walked or rode on horseback she would come across that sign, J.D. Peters, or be greeted by pleasant-faced fellows who straightway praised their boss. ‘When I came to America, I swore I would never work for another man’, he told her at evening at they sat on the porch of the hostelry, ‘And I’m keeping my promise.’  What girl could resist?”

History proves that Emmaline could not for she and J.D. Peters were married at Columbia in 1858, and a jovial crowd of teamsters attended the wedding and made Rome howl far into the night. Later she learned the joke, but Peters was then making big money and she had no cause for complaint.

Mrs. Peters died in April, 1874, and to her memory her husband erected an ornamental markble block, surmounted by a life-sized figure, the features resembling the deceased. Imported from Italy it was of pure marble, personifying Hope, a work of art costing $1,000.”

After the marriage, the couple went on to have one daughter,  Mary Emma Peters who was born on March 27, 1864, but I have found no other records of any other children being born. Emmaline passed away on April 29, 1874, and this beautiful monument was erected in her honor, out of love and loss, and one that is said to resemble the likeness of Emmaline herself, is all that is left to remember Emmaline by.  I have searched and searched but have failed to come up with anything explaining Emmaline's death. Did she die from illness? Complications from childbirth? So many unanswered questions.

I did find that her husband, Joseph D. Peters, remarried to Anna Foreman and they are both buried at the Catholic Cemetery together just next door to Stockton Rural. Hopefully sometime in the future I will be able to add that to this blog. But until then, I hope you have enjoyed this short story raised from the depths of the forgotten archives, giving light to the love story of Joseph D. Peters and his beloved, Emmaline. ---- 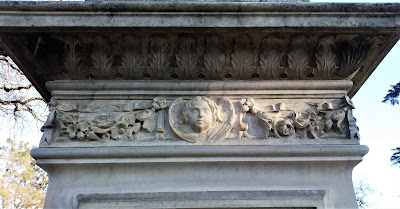 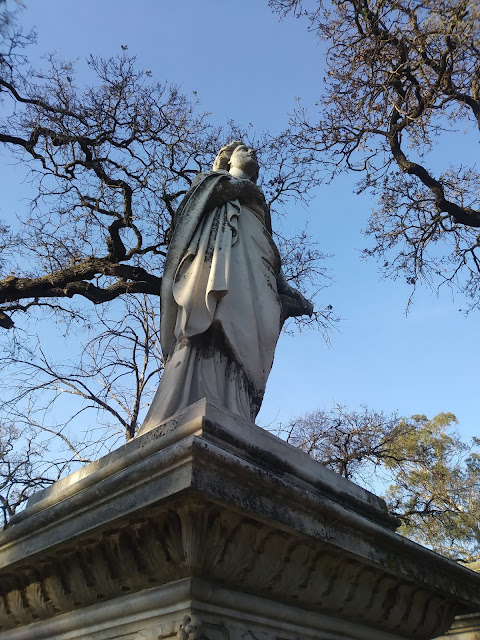