A Tragic Reunion - The Fatal Flight of Russell Higby 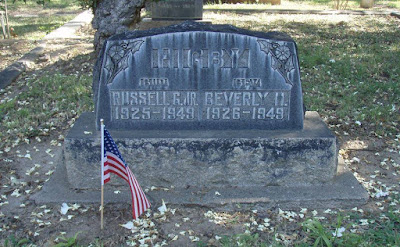 Love is a wonderful thing. In fact, most people never really get to experience true love in their lifetime. So, when one does find their "soulmate," it isn't hard to imagine how difficult it would be and what lengths one would go, if they suddenly lost that person. Think about it, when you are in love, you feel like you will have the rest of your life with that person, to love and protect them.

I am a very romantic person, always believing in love at first sight and of course, true love. So, when I learned the tragic story of the Higby family, I was moved by the intense love Russell had for Beverly. If you believe that losing the love of your life could make you do drastic and irrational things, then you might just understand the sadness that fell on Russell Higby's shoulders that fateful day on July 25, 1949.

Before I get to the tragedy, let's talk about the happier part of the story first.

Russell Higby, Jr. was born on May 26, 1925 in San Joaquin County. Beverly Janet Hodgins was born on October 7, 1926 in San Joaquin County as well. Having grown up in the same town, and having went to school together, naturally the two fell in love in high school and on June 10, 1945 the pair were wed at St. John's Episcopal Church on N. Eldorado Street in Stockton.

During WWII, Russell worked as an ambulance driver, and when he got home he was listed as working as a Farmer. According to the Stockton Record, he went to work for his family's produce company which kept him traveling between Stockton and Bakersfield. By 1949, it seemed that Russell had it all: a beautiful wife, a four year old daughter, and a new baby on the way.

Sadly, tragedy struck on April 1, 1949, when Beverly died during childbirth. She was buried in Block 13 at Stockton Rural Cemetery.  Russell was devastated, and attempting to pick up the pieces of his broken heart, he moved back in with his parents so they could help him raise his two daughters. According to the newspaper, his parents later confirmed that Russell had been "very despondent" since his wife had passed away.

Just shy of four months after the death of his beloved wife, Russell did the unthinkable. He went up to the North Stockton airfield (which after further research I believe was Oranges Airfield once located 1 mile north of Hammer Lane, just east of Lower Sacramento Road), and took off in his father's Cessna airplane. I am sure in the beginning, no one thought anything of it, as he had been seen routinely flying his father's plane before. But that day was different. Russell Higby was distraught and it was a one-way flight, with no plan on returning.

That's when he started making a scene with his flying way too close to buildings in Stockton, buzzing above right at tree level, flying under the telephone wires - ultimately scaring everyone half to death in the process. Hundreds of people were phoning the authorities to let them know, and sure enough this chain of events would prove to make headlines.

According to an interview that Russell's youngest daughter gave to the Record back in 2010, her father did a "berserk power dive at their Orange Street home," with him flying so low to the house that her grandmother (Russell's mother) could "see the beautiful blue of his eyes," as he flew by.

Her grandfather tried to chase him down in his Packard, racing up to the airstrip, trying to flag him down with his arms to tell him to go back to the strip and land. Even Sheriff Carlos Sousa had deputies at the airstrip waiting to arrest him. Russell had other plans, and he swooped down, flying beside his father's car and "tipped his wings goodbye, and then he flew up." One can only imagine the horror that his father felt knowing there was no way he could stop his son, and dreading what action he was to make next.

As all sad love stories go, this one would not be an exception. Just like the tale of Tristan and Isolde, Romeo and Juliet and many, many more...Russell Higby's undying affection for his beloved was so strong that he could not go on without her. In the final act of love for his soulmate, Russell Higby made two power dives while flying around the cemetery, but on the second dive (which witnesses claimed was a 2,000 foot drop straight down) he flew his father's plane into the spot where his wife was buried inside the grounds of Stockton Rural Cemetery, sealing his fate to be eternally reunited with his bride.

The newspapers reported that the wreckage was scattered over a 1,500 foot area, with Russell's body being thrown a good 30 feet from where the plane actually hit. Parts of the plane were even found as far as the roof of the mausoleum, which is located at the entrance of the cemetery grounds (the Higby plot is near the office which is in the middle of the cemetery).

In the end, Russell Higby ended his life in the spot where he felt his life had truly ended, the place where his beautiful wife had been laid to rest. Some people might read this story and think he had lost his mind, and maybe in a way he did. But could you blame him? Call me the romantic, but I think that he just couldn't live without her.  I think it's so very heartbreaking but I myself can understand. I wouldn't want to go on in this world without the person I love either.

So if you ever plan to visit the Higby plot at Stockton Rural Cemetery, please remember the intense love they shared. One so very strong, that the ties that bound them together were not severed in death, but instead drew one to the other even stronger. May Russell and Beverly rest in peace, together forever.