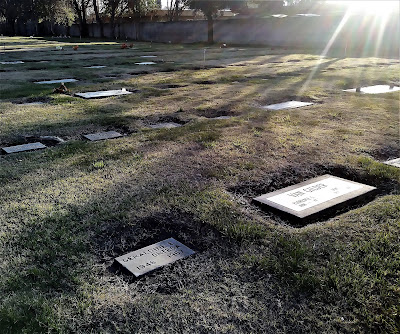 While strolling along the perimeter of Stockton Rural Cemetery, you might notice the elaborate crypts and monuments placed amidst the meager and modest graves. Like everyone rich or poor, famous or not, we all have a story to tell and we all deserve to be remembered. Some stories are more tragic and far more disturbing than others, but again, they didn't choose the way in which they passed no more than we will when our time comes. And just because a death is more shocking or uncomfortable to read or hear about than others, does not mean their story is any less important or shouldn't be shared for fear of upsetting someone's sensibilities.

In this case, we have the story of Geraldine Ortega who was born on August 25, 1946 in San Joaquin County. She was the daughter of Mr. & Mrs. Copeland, and she more than likely attended high school in Stockton. At the age of 20, Geraldine married a slightly older man named Daniel Ortega, Jr. on August 31, 1966. Geraldine had a six month old daughter, Karen at the time of the marriage to Daniel. (Possibly from a previous relationship). Very shortly after exchanging their nuptials, Geraldine became pregnant with her second child, Teresa. The marriage would prove to be one filled with domestic violence and after 15 months, Geraldine fled from her husband to live with her grandmother, Elva Copeland at 1734 Rhode Island Avenue in Stockton, California.  She had only been living with her for about two weeks before the tragedy struck. 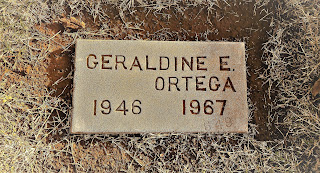 It seems Daniel was not about to let his family leave so easily. Geraldine had been receiving the worst threats from her estranged husband just one week before Halloween, but she had no idea how real the threat was. Just a week later, On November 1, Daniel showed up at Elva Copeland's house and started a physical assault on Geraldine. At some point her grandmother, Elva attempted to intercede to stop him, but that was when the brutal crime began.

During the struggle Daniel took a meat cleaver and physically attacked both Elva and Geraldine, fatally wounding both women. The details of the crime were too gruesome (and in bad taste) for me to describe, so I will just leave you with the fact that he butchered these poor ladies, all the while Geraldine's two infant daughters were in the home, possibly witnessing the act. After Daniel had committed the murders, he threw the murder weapons (meat cleaver and hunting knife) on the rooftop of a nearby building and many hours later, he eventually called the authorities the morning of November 2 and turned himself in.

"Dual Suspect Cries 'I Am Guilty!'
Daniel R. Ortega, 25, of Stockton, who was arraigned in Municipal Court yesterday for the murder of his wife and her grandmother, admitted the slayings during his court appearance. Ortega was booked at the county jail early Friday morning for the murder of Mrs. Geraldine Ortega, 21, and her grandmother, Mrs. Elva Copeland, 80, of 1734 Rhode Island Street in East Stockton.

Such a sad and terrible end to two precious souls, who lost their lives far too soon and in such a horrific way.

Elva was laid to rest at Burwood Cemetery in Escalon, California, while Geraldine was buried at Stockton Rural Cemetery in Block 19. Her simple concrete marker lays neatly in a row with others who have passed before or after her, and just like them, she had her own unique story to tell.

I visited Geraldine today and took photos of her grave for her granddaughter, and she was kind enough to give me permission to share the photos and her story with all of you. Since Geraldine's story has been forgotten for so long, I felt the need to share it with you, so she will be forgotten no more.--

Thank you Heather Benfield for reaching out to me! May your grandmother and great-great grandmother rest in peace, always.