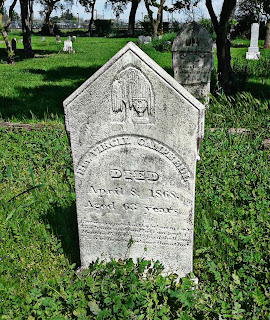 If you visit Stockton Rural Cemetery, in Stockton, you will find many well known names. Names for which streets and even surrounding towns have been named after. You will also find pastors, preachers and ministers from many churches. After all, Stockton was once referred to as the "City of Churches."  Today I will reflect on the first two African-American Churches in Stockton and their humble beginnings.

The very first African-American church in Stockton was the African Methodist Episcopal Church founded by Reverend Virgil Campbell in 1854. The wooden church was dedicated on May 20, 1855, by Reverend Phillips, and presided over by Reverend Campbell. By 1858, they decided to build a more lasting structure, this time designing their new church to be constructed of bricks.

The cost for the church was $ 1,800 at the time, and the cornerstone was laid on March 11, 1859, by Reverend J.B. Hill. There they stayed at 121 S. Commerce Street (corner of Commerce and Washington) for 20 years. Once it was noticed that the exterior of the building was beginning to deteriorate, funds were raised to hire Mr. Beasley, to remodel the church.  On May 2, 1880, the congregation rededicated their church, presided by Reverend J.D. Coyle. By 1880 their membership had grown to 19 adults, and 28 children attending Sunday School, which was superintended by J.B. Barton.

By the 1950's A.M.E. purchased the former church of Grace Methodist on the corner of Channel and Stanislaus Streets, where they have been ever since. --

First organized by Reverend Jeremiah King in September of 1854, the congregation did not officially have a church building until 1859, when they moved into the old Pioneer Presbyterian Church on Captain Weber's land. Weber donated his parcel to Reverend Jeremiah King for their congregation, although the church did pay for the structure at a very discounted price. Originally sold for $14,000 in 1850, the building was sold to the African Baptist Church for a mere $800. A fraction of the original price.

Reverend Jeremiah King looked after his congregation, and it was said that he only missed one sermon out of all the years he served his congregation as pastor. The one time having Samuel Reed conduct the Bible Study. By 1880, the congregation had 16 adult members and 30 children attending Sunday School.  Sunday School teacher Mrs. True*, worked for 8 years, while Mrs. Stowe* worked for 5 years.  (*Caucasian).

There is a marker on the south side of Washington Street just east of Madison in Stockton that marks the spot where Reverend Jeremiah founded his Baptist Church, and where history will forever remember it.--