In my last story, "A Ghastly Murder Remembered," I explained the murder of Mary Arrivey.  As far as the story goes, Gus Arrivey, crazed and in a drunken state,  murdered his mother in the most brutal way on December 4th, 1911. My last blog post went into the details of the murder as well as the background of both Mary and her son, Gus. This blog however, will be about Gus' mental state and the things he told the physicians who observed him after the murder, including newly found information in regards to his past mental state. His case was so odd that it made its way into the California State Journal of Medicine in 1912.

By his own admission, Gus told the physicians that at the age of  five he had been given his first taste of liquor, and had been fully drunk by the age of twelve. He claimed that his father died when he was just a child, and that he did not know much about his relatives. By September 30th, 1910, Gus was committed to Dr. Asa Clark's Sanitarium for his debauchery and "delirium tremens" attacks. He was released nearly six weeks later, on October 8th.

By the springtime, Gus was at it again with his drunken behavior and hallucinations. This time he was arrested for climbing to the top of a tree, claiming that he was rescuing his mother. He was arrested nearly eight times for drunkenness between the spring of 1911 and the date of the murder in December, 1911.

The night before he killed his mother, he claimed to have looked into a "doctor-book" for a sleeping remedy, to which his mother told him he should see a doctor for his insomnia. He alleges that he went to get medicine which was a mixture of choral and bromide, and he went to sleep. He claimed he woke up again at 4 p.m., saw that dinner was cold and that his mother had went to asleep, so he took another dose and went back to bed again. The events that occurred after these moments will remain the most gruesome, brutal and bizarre story I have ever investigated.


What The Officer On The Scene Saw

According to the California State Journal of Medicine, it stated that the officer on the scene found a woman's body lying in a room of the house.

"The body was covered up with rags, the woman's throat had been cut from ear to ear, her skull fractured and the abdomen opened, loops of intestines protruding from the wound."--

Gus was found about a block from the home, in the tules, knee high in water. He was carrying around a portrait of his mother, one of her shirts and her hat. He was barefoot and was not wearing a coat or hat, and had beaten a serpentine path in the overgrown grass, claiming that a group of black men were chasing him for killing his mother.

So What Was Gus' Side Of The Story?

The story that Gus gives the physicians is one that is not only bizarre, but perplexing. It is obvious this guy had some serious mental issues and the alcohol only exacerbated the situation. Still, the idea of this "space ship" and other odd things he states left me feeling very uneasy, mainly because he speaks of the events with such ease and no sense of emotion.

Here are some excerpts from the interview:

Q: What's the matter Arrivey, what  trouble have you been into?

Arrivey: "I haven't been into any."

Q: Where is your mother now?

Arrivey: "She is up in this business going around in the jail- in that new flying machine. She went up in the spirit."

Q: Where is her body?

Arrivey: "Her body lies over in the morgue, I guess."

Q: How did she get killed?

Arrivey: "I killed her. There was a gentleman, somekind of religious man. I think I met him on Sutter and Market Streets. I forget how long ago. He showed me how to talk a signed language- sort of whisper just by moving the lips. It took him no time to teach me that lingo. I talked through the ceiling a while ago. I talked to him at a distance when he directed me."

Arrivey: "Kill my mother. I don't exactly remember when- sometime late at night. He was in Mars when he told me."

Q: How did you kill your mother?


Gus goes into further detail that the man from the space ship kept telling him that his mother had a baby in there that he wanted to take out. The alleged "man from Mars" didn't want Mary's spirit to go out but the baby's spirit. Obviously, the woman was well past child bearing age, and there was no mention in any records I found of her having been pregnant. This was obviously another one of his delusions. What is so disturbing is how easily he speaks of basically gutting his mother like a fish, on the bed.  I felt sick to my stomach when he finally says that he took her to the porch and slit her throat, eventually admitting he almost cut her head off!  He then washed up and changed his clothes, barricaded the front door with a washstand, piled rags on top of his mother and moved furniture to surround her body and then he ran out the back door into the tules. He stayed there all night.

When interviewed he spoke of the evening outside as if he wasn't cold, although it was recorded to have been very cold that night before. It appeared as if the cold weather and rain did little to affect his mental state. In fact, he had no recollection of it, despite being barefoot and coatless.

He kept saying that a group of black men, and two "white fellows" were chasing him and that they were going to kill him for killing his mother. He also said he brought the matches from his home out to the tules so he could be burned alive as a sacrifice. When asked about the "sacrifice". Gus said,  "He (the man from Mars) claimed it was a kind of offering."

Gus stated that he and his mother got along fine, and never had any "words " although she didn't like it when he "went on a jag." When asked again why he killed her, later he claimed that he didn't know. His story continues to go back and forth, since later he states that he wanted to kill her, he knew what he was doing and he didn't "pay attention" because he didn't think he was committing a crime.

When asked if he knew what he did was wrong, Gus answered:

Q: What do you think they will do with you?

Arrivey: "Well, they will either give me life or death. I prefer death."

Q: You are ready to take your death sentence now?

Arrivey: I guess so. I don't like to stay in jail.

Soon after these questions he adds that after his mother's death and he was running around the field, he claimed that his mother was in the ship above him.

"She was in the machine. She was crying and talking and calling her husband down."-

As the doctors noted, during the entire interview, Gus showed no emotion and relayed the entire story as if he was telling it from another person's perspective. Over the course of a few days, the doctors watched him carefully and questioned him more. As time went on, his story changed a bit and he seemed to have forgotten a lot of things he had said previously. According to the doctors he was still speaking of the man from mars, and describing some more odd experiences.

"I saw something like a star in the heavens and as if there was a searchlight extending from Mars to the Earth- and I thought I saw a flying machine with a man in it, going up towards the star and coming down again. The only other person I remember seeing in the house besides my mother was a man of dark complexion, standing in the back room, but he didn't say anything. He was a middle-sized man, wore a chauffeur cap and leggings. I saw no moving pictures, animals or men of extraordinary size. After I had done this to my mother, I think I remember feeling numb and stupid-like. I had no fear at all."

He continues with his odd explanations of the men chasing him in the tules, as well as a morbid dream he had on the way to jail. Doctors claimed that by the 5th day of his incarceration he was actually acting somewhat normal and having no more hallucinations or speaking of oddities. By January 15th, 1911, the courts deemed him sane, (why I will never understand that), and he was sent to San Quentin for a life sentence. They did add that they knew he committed the murder in a "dream like state" caused by delirium tremens and that he could very well do this again, if given the chance, thus the reason he was given a life sentence.

With all the strange circumstances and the complete brutality of the crime, it is insane that the State of California released this man into society nine years after he butchered his own mother. I haven't been able to figure out what he did to violate the terms of his parole, however it is on record that he did return to San Quentin in 1927 and remained there for the duration of his life. 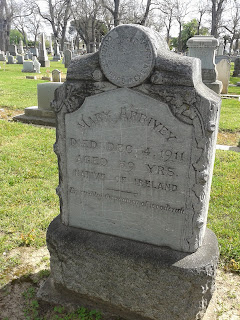 When I first posted the article about Mary Arrivey's death, I stated facts: her background, what happened, and where Gus ended up. I briefly touched on the actual details of the murder. After digging deeper and uncovering this heinous crime, I am left forever scarred at what I read. We sometimes come across articles in the newspapers, online or even segments we hear on the radio or television, speaking of gruesome murders, but in all the years I have researched and wrote about stories such as this, I have never come across one so disturbing.

My heart goes out to Mary Arrivey, and the pain and suffering she must have went through in her final moments. One can only hope she didn't suffer, although the evidence shows she did. I will never look at this case the same again. I wonder now if maybe the reason this story isn't as well known in Stockton as say the "Trunk Murder of 1906," maybe it was because of the sheer brutality of the case. Maybe it was forgotten for a reason...we can only wonder.

Copyright 2015- J'aime Rubio, originally published 3/21/2015)
All rights reserved. No part of this blog may be reproduced, stored in a retrieval system, or transmitted in any form or by any means without prior written permission by the author/publisher, J’aime Rubio.