Mary Arrivey's headstone sits quietly among the thousands of markers, graves and monuments at the Stockton Catholic Cemetery in Stockton, California. If you look closely, you will notice an odd pattern of scratches on the marker itself. It is safe to say that more than likely we will never know exactly why those scratches were engraved in Mary's headstone, or who did it. The story of how she ended up in the cemetery proved to be one of the most heinous and almost incomprehensible murders I had ever researched.

Mary Arrivey, was born Mary Byrne in 1862. A native of Ireland, she immigrated to the United States at some point in her life, later marrying Augustino Arrivey on December 13, 1881 in Stockton. Augustino was a blacksmith from Louisiana, and was born around 1851. Prior to his marriage to Mary, he was also listed in military records in 1876, as a 7th Corporal in the 2nd Brigade. Although I couldn't find his death record, the city directories later list Mary as a widow. At this point her adult son, Augustin Francis Arrivey is living with her. 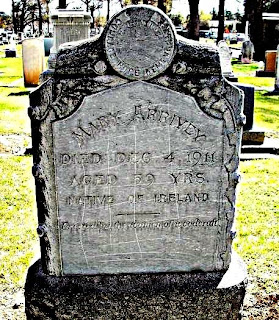 Mary worked at Stockton Laundry, located at 728 E. Washington, while her son, Augustin worked as a printer at a small newspaper called, "The Mail," an earlier version of the Stockton Evening Mail. According to directories, Mary and her son moved around a lot. During my initial investigation I believed that the incident I am about to discuss took place at 847 LaFayette in Stockton, as her Findagrave memorial suggests.

After further digging, I have found that just less than a block or so away from that location, the home in which Mary was actually living in during 1911, was at 219 S. Locust Street in Stockton. The newspaper claimed that she had lived on Harrison, however the directory speaks of Locust Street as being her home address. I could find no listing of Mary living on Harrison at any point in time. I have to assume, given the address on the directory, that the event actually took place at the original home that stood at 219 S. Locust Street in Stockton and perhaps that was just a clerical error on the part of the newspaper. If I find other evidence later, I will update this blog.

According to the San Francisco Call, dated December 5, 1911, it says:

"Crazed by liquor, Gus Arrivey, a printer of this city, murdered his mother, Mary Arrivey last night in her home...."--

The account goes on to detail that Gus claimed that an airship was circling around his head, when a man in the airship allegedly told him to murder his mother. The heinous and most gruesome crime was committed with a hatchet, while he hacked his mother to death.


He then dragged her body around the home leaving a bloody mess all over the floors. The police found the mutilated body of Mary, along with "disarranged bedding and furniture" that showed signs of a serious struggle.  The police located Gus, two blocks from his home in a nearby swampy, grass area where it appeared he had been there all night. He was found barefoot, hunched down and babbling incoherently.

After such a horrendous act, the investigators were not sure whether Gus was insane, drunk or just pure evil. His sanity was called into question, so Dr. A.W. Holshot examined Gus, and found that he was suffering from "delerium tremens" which is a most severe form of ethanol withdrawal, and was deemed sane to stand trial for the murder of his mother.

According to the book, "King Alcohol Dethroned" by Ferdinand Cowle Iglehart, D.D. (1919) he mentions Gus in his reports: 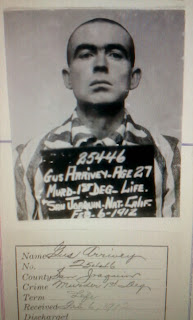 "August Arrivey, thirty years old, a printer by trade, is
under arrest here, the confessed murderer of his mother,
Mrs. Mary Arrivey, fifty-eight years old. 'The man in
the airship told me to do it.' Arrivey continually mutters
as the only reason for his crime. Because of his actions
the police believe him insane. Liquor is believed, however,
to be at the root of the man's crime, as he had for the
last few years obtained one position after another, only to
lose them in rapid succession on account of sprees. Mrs.
Arrivey was found lying in a pool of blood in the kitchen,
with her skull crushed and her face gashed as if from
blows from a hatchet. Search of the premises disclosed the
son, muttering like a child, hiding behind some bushes in
the yard. Confronted with the dead body of his mother,
he confessed his crime." This paragraph, which appeared
in a Stockton, California, paper, a few days ago, is one
which shocks us for a moment as we read it, and is then
forgotten as a commonplace incident of life. "--


Gus was found guilty in the 1st degree of the murder of his mother, Mary Arrivey and sentenced to life in prison. He was received at San Quentin State Prison on February 6, 1912, where he served 9 1/2 years. He was then paroled on July 13, 1921, but at some point he violated the terms of his parole, because by 1927, he was back in the system again. He stayed for the remainder of his life behind bars, eventually dying on July 1, 1941. He was buried at the cemetery behind San Quentin Prison.

When I was shown a newspaper clipping of this story by Roland Boulware, the man who entered Mary's information and photograph in Findagrave, I was taken aback by the brutality of the crime. I could not fathom that a son would do such a horrendous thing like that to his own mother. What a sick and demented person this man was to do such a horrible thing.

It also saddened me that we had never heard anything of this story before. With all the infamous stories in our history in the United States, such as the "Lizzie Borden" murders and other heinous crimes, why was this crime virtually erased and forgotten in Stockton's history?

According to Roland Boulware, he believes the scratches were relatively new when he took the photo several years back. Still, there is no way to know for sure when those marks were left on her grave. In the end, I wrote this blog to honor the memory of Mary Arrivey and tell her story. As morbid as her murder was, this was still a piece of Stockton's history and should never be forgotten or erased again.

(Copyright 2015- J'aime Rubio, originally published 3/20/2015)
All rights reserved. No part of this blog may be reproduced, stored in a retrieval system, or transmitted in any form or by any means without prior written permission by the author/publisher, J’aime Rubio.