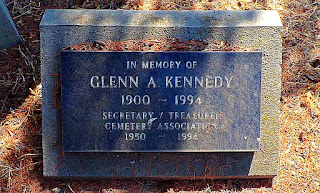 Brothers Glenn, Maurice and Roy Kennedy were born at the turn of the Century in Stockton, California, to parents Ernest Walter Kennedy and Avah May Jones Kennedy.  Growing up in Stockton during it’s infancy, and watching it sprout up into this huge city over the years must have made a huge impact on this family, because it was the history of Stockton and its early pioneers that led to them getting
involved in the Rural Cemetery. 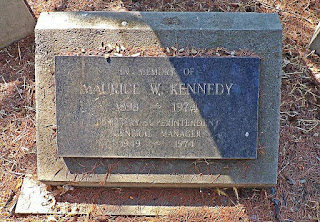 Anyone who is truly knowledgeable about Stockton Rural’s history, will always mention the Kennedy’s at some point while speaking about the cemetery itself. The Kennedy’s were the life blood of the cemetery for decades upon decades. Had it not been for this passionate family of history lovers, much of what is preserved today regarding those buried within these gates would be forever lost.

Maurice Kennedy and his wife, Marietta, both worked at the cemetery together. Maurice was the cemetery’s superintendent and general manager, while Marietta worked as the secretary for over 20 years until her retirement. Glenn Kennedy, brother to Maurice, was the biggest history lover of them all, and he not only worked as secretary and treasurer to the cemetery for many years, but he devoted his life to researching the history of everyone buried within these hallowed grounds.

Glenn Kennedy spent years researching, compiling, writing and publishing small books dedicated to honoring the dead at Stockton Rural, by telling their stories in great detail. He would often donate his published works to the local elementary schools to encourage the children to learn more about Stockton history and those who made history in Stockton. His lifelong work is remembered with every story that has been resurrected from the past and put to paper by way of his hand.

According to all the records I could find, it does not appear that Glenn ever married, but instead was married to his work as a local historian. On November 30, 1994, at the age of 94 years, Glenn Kennedy passed away. His obituary found in the Stockton Record stated that at his request there was no funeral or memorial service. His accomplishments were not given a mention either.

The fact that he requested there be no funeral or services for him shows he must have been a very humble person, and not one to toot his own horn. That is very telling on the part of his personality. Although he strove to bring back the stories of the forgotten ones at Stockton Rural, digging through archives, books and every record he could get his hands on to make sure none of these pioneers were forgotten, Glenn was uninterested at leaving his own personal legacy.

No other person had such dedication to this cemetery, and I doubt there will ever be anyone with such devotion there again. Those who roam the winding paths of this property, taking photos, reading headstones and even researching the stories within, will never understand the depths of loyalty and love he shared for this place. Sadly, when Glenn passed away, his legacy was swept aside and nearly forgotten.

I have vowed that as long as I am researching the stories hidden here, and as long as I am walking these grounds, I won’t let Glenn Kennedy be forgotten. I will always keep Glenn Kennedy’s legacy alive by speaking about him and all the work he did here so that his lifelong passion and dedicated research will have not been in vain, because I feel that just like he wanted to make sure everyone was remembered here, now I want to do the same for him.

To the original keeper of the forgotten ones, you will not be forgotten either.
Rest in peace dear Glenn.

P.S. Thank you to Roland Boulware, a long time Stockton Rural Cemetery researcher who initially introduced me to both Glenn Kennedy's work as well as the cemetery itself.