The Life of Sheriff Sibley

During my research on the story of Stockton's infamous murder of Albert McVicar committed by the black widow of Amador County, Mrs. Emma LeDoux, I learned of Sheriff Sibley. He was the one in charge of bringing Emma LeDoux as well as many other criminals and fugitives to justice in his long career. After looking into his life in further detail, I decided that his story would be a great addition to my new blog on Stockton history.

Walter Frank Sibley was born in Eddington, Maine, in 1858. His parents were Julia and Frank Sibley, who were native to the area, having descended directly from passengers who arrived on the Mayflower. After growing up and attending school, he decided to head west at the age of twenty.

It was said that with only five dollars to his name, he boarded a train headed out west to start a new life. He first began working on a farm owned by John Lyman Beecher, where he literally fell in love with the farmer's daughter, Clara Beecher. While working for Beecher, he saved every penny he could to attend Stockton Business College. Soon he married the love of his life, Clara Beecher on September 23, 1881. Wanting land of his own, and a business of his own, he leased land and began farming on it, becoming quite the successful businessman. With the profits, he turned and bought land of his own to farm barley and wheat crops.

During his life in Stockton, Sheriff Sibley owned around 1000 acres of land in the area, including part of the Mormon Slough. He was a staunch Republican, and considered a man faithful in his work. He was a member of the Morning Star Lodge No. 68, Free and Accepted Masons, the Knights of Pythias, the Knights Templar, the Elks, Oddfellows, Woodmen of the World and Red Men fraternal orders. He was known to be a very generous contributor to various charities, and often used much of his salary as Sheriff to do so.

In the 1898 election for Sheriff, Sibley was voted into office. On the day he took office, January 1, 1899, his predecessor, Sheriff Cunningham offered him some words of wisdom when handing over his pistol and handcuffs:

"I have never had any use for it. It is only to be used when your life is in danger or when you are positive that a prisoner who has committed a felony is trying to escape."

"These are not for exhibition, but for use when you arrest a man whom you have reason to believe will attempt to escape, it is your duty to put them on him. Otherwise you hold out an inducement for that man to kill you and thus commit another crime in endeavoring to escape."-- Stockton Evening Mail (1/3/1899)

Sheriff Sibley faithfully served three full terms as Sheriff, first elected in 1898, and was beginning his fourth term when he became ill.  On June 4, 1911 while in Berkeley, Walter F. Sibley succumbed to illness caused by Bright's Disease (a fatal form form of kidney disease and nephritis). He had been ill for nearly 6 months before he died.  His estate which totaled about $45,000 was left to his wife. Most of the fortune was tied up in land and their home which was located at 144 E. Willow, in Stockton (corner of Willow and Hunter streets).

"The funeral for the late Sheriff Walter Sibley, will be held Wednesday morning at 10 o'clock from the First Congregational Church and will be under the auspices of Morning Star Lodge No. 68, Free and Accepted Masons. The remains will be shipped from Berkeley tomorrow afternoon. The members of  The Stockton's Merchant Association will close their stores from 10 to 11 o'clock."- San Francisco Call, (6/6/1911) 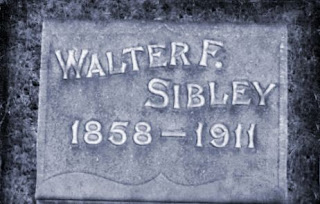