Reuel Gridley and His Sack of Flour 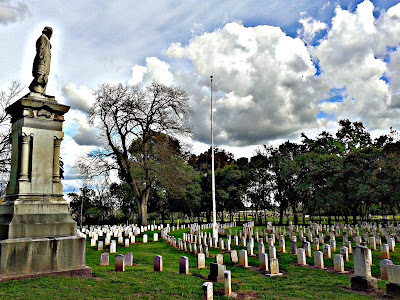 If you have ever been to the Stockton Rural Cemetery, located in Stockton, California, then you would know that there are many beautiful headstones, crypts and monuments there. One of the monuments that caught my eye there was the statue of a man that appears to be looking after the section of military graves in the cemetery. I take my walks at this cemetery sometimes, as well as taking photographs for my research there, and I decided to research and write about this hero the monument was erected in memory of,  Reuel Colt Gridley.

Just who was Reuel Colt Gridley? He was dubbed one of the greatest unarmed heroes of the war, at that time. Why do you suppose that was? This was because of his great work with one sack of flour, that helped save the lives of many injured soldiers. For you to understand the entire history of this man, we must go back to the beginning of his story.

Reuel (sometimes misspelled Ruel), was born on January 23, 1829 in Hannibal, Missouri, to Amos Gridley and Sarah Thompson. His father was a 4th generation American, his 5th great grandfather having come from England to Connecticut in 1630. On his grandmother's side of the family, was the famous Colt's of Connecticut who invented the Colt firearm. While growing up in Hannibal, he was schoolmates with another famous person, Samuel Clemens (who later used the name, Mark Twain). His history with Clemens proved to be helpful later in life as you will read shortly.


During the Mexican-American War (1846-48), Gridley enlisted and served in the Army. By 1850, he met and married Susan Snyder in Louisiana. By 1852, he decided to take his chances and travel to California via the Isthmus of Panama, arriving in San Francisco by boat.

From working at a newspaper, to banking and later running a courier service in Butte County, he did almost everything. The 1860 Census shows that he and his wife and two children were living in the Kinshaw Township, Butte County, which is near Paradise, California. Sometime between 1860 and 1864, he moved to Austin, Nevada while the silver mines were booming. Soon after, Gridley built a stone building and opened a store. He also became a partner in the firm, "Gridley, Hobart & Jacobs." 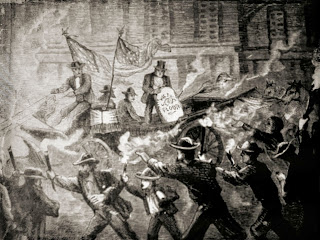 After parading through town and presenting the sack of flour to Herrick, the new mayor didn't have any use for it. This raised the question on what to do with the sack of flour. Gridley decided to auction it off and send the proceeds to the Sanitary Commission, a new organization that was set up to care for wounded soldiers and to protect the bodies of dead soldiers on the battlefield during the War of the Rebellion. The first winning bid is questionable, as many sources claim that Gridley himself paid $300, however the book "Roughing It" by Gridley's old school playmate, Mark Twain (Samuel Clemens) claimed that it was a mill man who bought the bag of flour for $250 and when asked where to have it delivered he stated "Nowhere, sell it again!"

This began the trend of auctioning the sack of flour over and over in order to raise funds for the Sanitary Commission. By the night's end, they had raised nearly $8,000.  Word spread to nearby Gold Hill and Virginia City, where Mark Twain (Samuel Clemens) was living and working at the time. The city invited Gridley to come to have an auction there, but before having time to spread the news throughout the citizens of Virginia City, Gridley had already arrived. The turnout at the Opera House, only raised about a couple thousand dollars the first time around, which I am sure was a disappointment.

The next day though, Virginia City had a parade of carriages run down C Street with all of the city's finest including the mayor, recorder, reporters, members of the Common Council and Gridley. The citizens were in awe as the cavalcade of carriages came sweeping through town, but they were surprised when the group kept going onto Gold Hill where the auction was a success. Later on the parade swept back through town in the evening, creating a stir of excited citizens with "torches glaring, flags flying and bands playing." 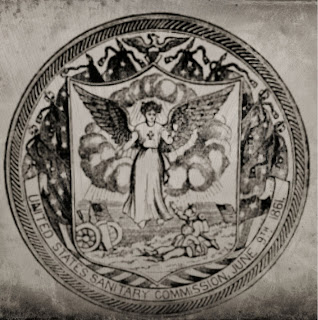 According to Clemens, that night, within two hours they had raised nearly $40,000 for the Sanitary Commission. On Clemens own accord, he claimed it was the finest day Virginia City had ever seen.

From there on, Gridley continued onward to Carson City, San Francisco and then touring across the country ending up in St. Louis for the Sanitary Commission Fair where the sack of flour met it's end, being used to bake cakes and sold with all proceeds going towards the organization.  In the end, approximately $250,000- 275,000 was raised for the Sanitary Commission in helping aid the wounded and sick soldiers as well as the bodies of the dead soldiers.

Although Gridley had become a hero nationwide, he came back to Austin in ill health and depleted of personal funds, with his store nearly going bankrupt. Since the silver mines were drying out, there was no money to be made there, so he eventually moved back to California penniless. In 1866, Gridley and his family moved towards Stockton (some sources claim this was to be near his sister). Once arriving on the outskirts of town, the family camped out of their wagon and Gridley would go into town to get supplies. With his health getting worse and worse, traveling from camp into town daily became harder and harder for him. The family eventually took up house in one of the empty "pest houses".

One of the local residents recognized Gridley and helped the family acquire modest living accommodations, despite his adamant refusal and resentment to accept charity. With the town backing him, he was finally able to get the medical attention he needed and a job to support his family again.  It seemed that Stockton gave Gridley the hand up (not a hand out) to get him back on his feet again. With the help from Henry Sargent who owned the market on Hunter Street, Gridley became a partner in the business and flourished as a businessman once again.  Not only did Gridley become well known and respected within the community of Stockton, he was an upstanding Christian member of the Methodist Church, and also a member of the Masonic Order (Morning Star Lodge) in Stockton as well as the Commandery of the Knights Templar's of Stockton.

By 1868, Gridley and his family (which consisted of his wife Susan and four children), moved to Paradise City (west of Modesto) along the Tuolumne River, working as Postmaster. Sadly, his health affected him drastically and he died only two years later, on November 24, 1870, at the young age of 41. It seemed that he never forgot the kindness Stockton showed him in his time of need, and at his request he was buried at the Stockton Rural Cemetery, the place he wanted to rest for eternity.

Reuel Gridley accomplished so much in his short life, and proved himself a hero who gave his own time, money, and literal health to help those less fortunate as he. Although he came out of it at one point penniless, he was still rich with his Christian values and the respect of his fellow citizens that when he was in a state of poverty, they were more than willing and eager to help this wonderful man.
Reuel Gridley was originally buried with a plain wooden marker in the Stockton Rural Cemetery. However, the Rawlins Post No. 23 of the Grand Army of the Republic and Stockton citizens raised funds to erect a monument for Gridley, and have his remains exhumed and reburied at the base of the monument. 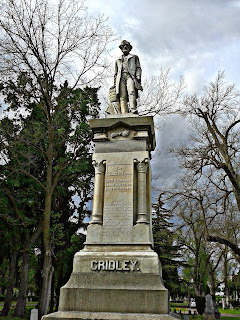 “To the poor, he was generous, and the needy never left his presence empty handed. He was in fact too whole-souled and too kind hearted to accumulate wealth, but he grew rich in kindly deeds and Christian grace.”--(excerpt from booklet).

The September 10, 1887 issue of the Los Angeles Herald states:

A Grand Army monument to Ruel C. Gridley, who raised $275,000 for the Sanitary Commission during the Civil War by selling his famous sack of flour, was unveiled here this afternoon. A procession formed, and marched through the streets, after which the various organizations represented in the parade proceeded to the cemetery.

At 2 o'clock the ceremonies began with prayers by the Chaplain, Rev. A.C. Bone, followed by an oration by Judge Swinnerton and the reading of the receipts and expenditures of the monument fund by Stanton L. Carter. At the conclusion of the ceremonies the statue was unveiled, disclosing the handsome marble to the hundreds assembled.

The statue was cut in Italy. The figure is five feet ten inches high, and was patterned from a photograph of Gridley. The statue rests on a base and pedestal combined, the height of which is thirteen feet and two inches thus making the entire monument twenty feet high. It cost $1,775."-- 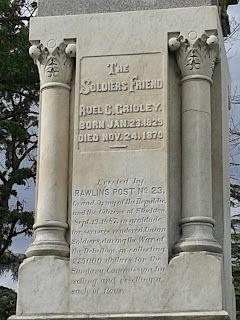 Lastly the August 25, 1871 issues of the Peninsula Courier featured a very lengthy tribute to Gridley, ending their article with the statement below:

"He leaves the wife of his youth and four children: Amos Brice, Clara L, Mary and Josephine, a number of relatives, troops of friends, and a great nation to mourn his loss; in fact, humanity, the world over, deplores the loss of such men. His children should be adopted as the wards of the nation. May they live long to honor the name of their noble father, and to imitate his worthy example in doing good. The nation will listen to the grand history of that sack of flour with gratitude and gladness. His death will only be remembered in sorrow."--


In ending, Reuel Gridley was someone worth remembering in History. Not just Stockton History, not just California History, but U.S. History. His works did so much good for so many, that it is a very sad thing that he is not remembered the way he ought to be. You will not read about his story in school textbooks, nor will you find much about him in local museums around the State. Sadly, our history is being erased and forgotten and that is why I am doing the work I do, because I believe everyone deserves to be remembered, especially Mr. Gridley.


His grave, (which has his first name misspelled), sits overlooking the many soldiers graves at Stockton Rural Cemetery, now a historical landmark. His wife, Susan died in 1910 and was later buried near him in the same area of the cemetery.

Let us always remember the man, the hero, Reuel Gridley,  "The Soldier's Friend."

Photos of grave and cemetery, property of J'aime Rubio
All other photos are in public domain